On the Relevance of Adversarial Queueing Theory in Practice

Adversarial Queueing Theory (AQT) [1] has been introduced to analyze the inherent stability characteristics of network topologies assuming certain scheduling policies. In particular, it has been shown for FIFO scheduling that seemingly innocent continuous packet injection strategies, where the aggregated arrival rate of requests for each link does not exceed the link capacity, can lead to unbounded queue lengths and thus, unbounded delay. Such a network configuration is termed unstable.

In reality, such patterns can be caused by misconfiguration, or unfortunate circumstances and have also been considered as a possible security threat. In fact, descriptions of network adversaries read like a cookbook for stealthy low-rate denial-of-service (DoS) attacks inducing arbitrary long queues in a target network, which in turn cause high delays and loss.

Little attention has been given to quantifying the actual threat potential of adversarial queueing effects. Although topological considerations suggest that adversarial instability may be possible in realistic network topologies [2], it is not immediately obvious whether instability effects really pose a practical threat. The most striking theoretical and "analytically convenient" assumptions of AQT are infinite buffers and a synchronized network model.

This work [3,4] attempts a new perspective on adversarial queueing effects. We investigate 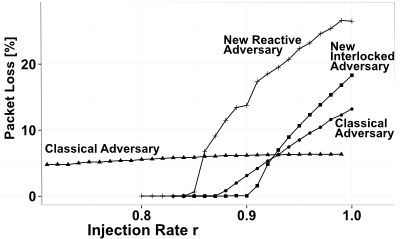 Our analysis (and simulations) also prove that the loss caused by classical adversaries (like the Baseball (BB) scenario) diminishes to irrelevant values in face of network randomization. The underlying model assumes that (instead of a deterministic network model with
uniform and synchronized network links) each channel’s delay (the corresponding server delay for processing a single
packet) follows a Weibull distributed random variable with mean one and various degrees of standard deviations up to 300%. 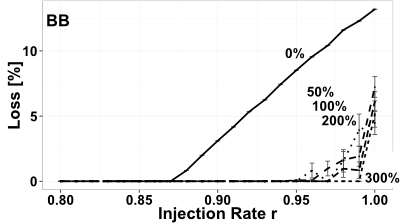 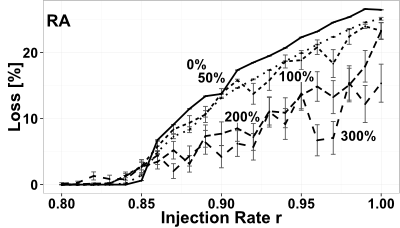 The work in our papers [3,4] is supported by simulations that are carried out in the AQTmodel extension to the simulation framework is OMNeT++. All source code is open and available here. You will need a running OMNeT++ 4 distribution (the simulator was developed in 4.2 and 4.4 but any more recent version should work, too), sufficient hard disk space to store recorded results (on the order of 5-100 GB ,dependent on what is recorded and in which network), and TCL/TK for visualization.

In order to run different configurations (e.g., injection rates, or adversaries), no modification of the code is requires - it is a good idea to start with adjusting the main configuration file omnetpp.ini.

To encourage modifications and future reuse, we distribute this code under the GNU Lesser General Public License (see licenses).

This program is free software: you can redistribute it and/or modify it under the terms of the GNU Lesser General Public License as published by the Free Software Foundation, either version 3 of the License, or (at your option) any later version.

This program is distributed in the hope that it will be useful, but WITHOUT ANY WARRANTY; without even the implied warranty of MERCHANTABILITY or FITNESS FOR A PARTICULAR PURPOSE. See the GNU Lesser General Public License for more details.

The Baseball Adversary due to [5] 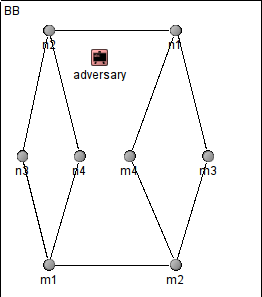 The A+ Instability Minor from [2]

The gadget chain adversary due to Lotker et al. [7]

The new Interlocked Baseball Adversary proposed in [4]. The internal name (in the simulator is CE3). 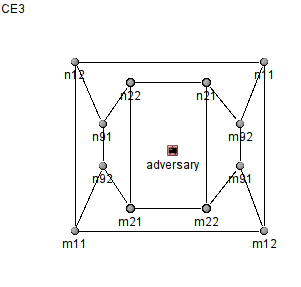 The new Reactive Adversary proposed in [4]. The internal name (in the simulator is CE7). 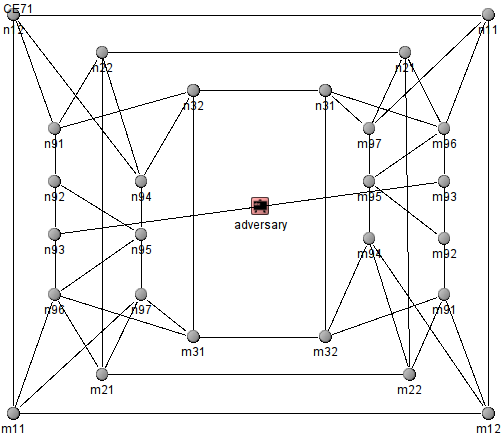 Further drafts on possible extensions like this one, which bears the internal name CE75. 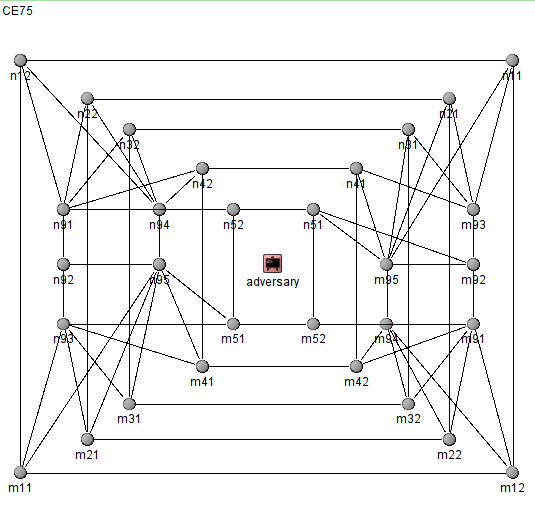